Honestly, we had a better class of criminals back then. By Ken Brooks 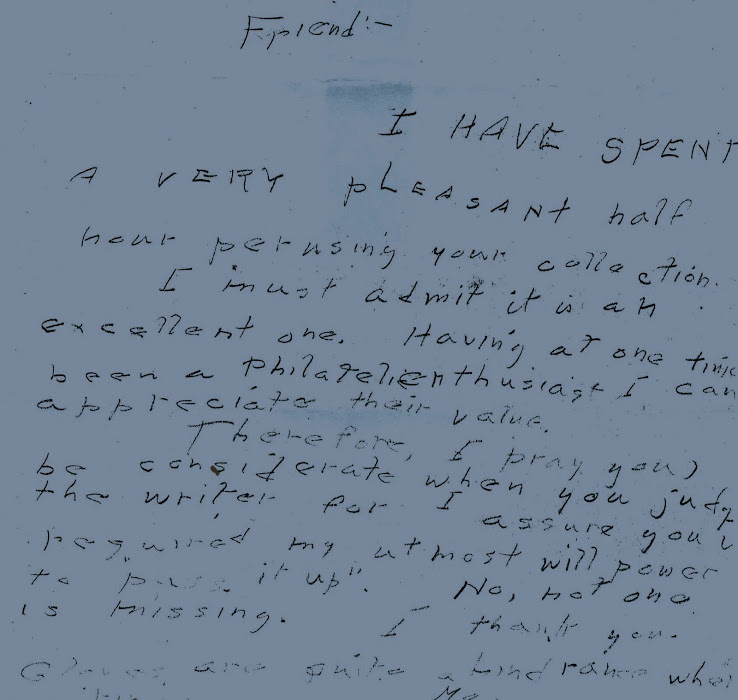 I own a collection of fairly rare stamps but I am not a collector myself. Fact is, I barely know which end of an Inverted Jenny is --well, verted.

While I may know diddly about stamp history, I am an expert on the provenance of one collection in particular.

A nearly 100-year-old book of stamps--the International Postage Stamp Album, Nineteenth Century--was part of a collection that belonged to my grandfather, and after he died, to my father, who in turn bequeathed it to me when he passed in the spring of 1990.

But the musty book tells only part of this astonishing tale. There's the note found inside one of the books , handwritten in comically-formed calligraphy, penned over eighty years ago by a thief wearing gloves. There are crinkly newspaper clippings from April 1925 describing a daring wee-hours heist. Finally, a few old family photos provide face and features to the dramatic personae.

This is the story of a stamp collection that wasn't stolen, and the gentleman thief who left it behind.

The tale unfolds in the wee hours of April 2, 1925, in the up-state Chemung County river town of Elmira, New York, as a lone cat burglar shimmies up the fire escape of a building adjoining Teppers, the department store owned and operated by my grandfather Sol Brooks and his brother-in-law Emmanuel Tepper.

Four stories up, the brazen goniff hoists himself over a ledge and onto the landing of Teppers. He pries open the heavy shutter to an office window and, remembering to close the shutter and window behind him, climbs inside.

The thief could hardly been expected to know, or care, that the business he was about to burgle represented the co-joined efforts of two first-generation immigrant Jewish families--the Teppers' and Brooks'--determined to achieve financial security for themselves, and to raise and educate their children to carve their own mark in the new world.

The Teppers had fled the wheatfields of Hungary in the mid-1880s, one step ahead of a vicious cholera epidemic. They settled in the wheatfields of Terre Haute, Indiana where they peddled general merchandise from a horsedrawn wagon.

Family members eventually migrated south, to Selma, Alabama, after finding an inviting vacant storefront. Teppers department store opened on Broad Street in Selma in 1913-- their credo: "quilts to clocks." It was the familiar immigrant success saga writ thousandfold in towns across America.

The Brooks family took a different route. My great-grandfather Jacques Brooks sailed from his native England in the 1870s and settled in Louisville, Kentucky, where he opened a small storefront. But Jacques suffered terminal wanderlust and left his wife and two sons, Edward and Sol, for the unlikely prospect of gold out west, eventually sinking his savings into 100,000 shares in a Colorado goldmine that didn't produce. He drifted to Ely, Arizona and got himself elected sheriff. The family he left behind scraped along.

One day when Edward was in high school a classmate showed him a valuable postage stamp. "Pay me a 5% commission and I'll sell it for you," Edward told him. The stamp sold for $2000 and Edward was hooked on philately--or at least on the profits brokering proffered. (Brother Sol wanted no part of this commercial venture; instead, he fell in love with the stamps themselves).

Within two years Edward's stamp-bartering brought in enough money that he and Sol opened Brooks Brothers department store in downtown Louisville. A few years later Sol met Fannie Tepper, the belle of Selma, Alabama. It was Fannie's brother Emmanuel who, on a train trip to New York, discovered the store for sale in lovely Elmira. Teppers Department store opened its doors in 1913.

And the retail gods said: It is good. And it was: business flourished, as Teppers Department Store became a fixture in the lives of early-20th century Elmirans.

Which brings us back to the wee hours of an April night in 1925, to a pried-open window on the fourth floor of the Teppers building on Water Street.

The fourth floor: that's where the moolah was kept, in a gigantic safe the size of a refrigerator. Looking at this monstrous metal monolith (as I did many times as a child) it was difficult to imagine how anyone could possibly crack it open. As it turned out, our enterprising thief needed but a hammer, a chisel and a coat hangar.

One can imagine the scene as the ponderous safe door lumbered open and revealed it's precious booty: the day's receipts of $795.97. The chiseler must have felt a tingle clear down to his fingertips: this was the equivalent of over $30,000 in today's dollars (according to the Unskilled Wage Scale--although one could make a convincing case that safe-cracking is highly-skilled work indeed).

But our thief must have done a double-take: next to the cash sat a large tin box, the sight of which must have flooded his brain's pleasure center with a blast of endorphins, that rush of adrenaline that makes cat-burgling so arousing to those who burgle. (Or so I hear).

What treasures lay within?

Diamonds? Bearer bonds? Wads of hundreds? He opened the tin and gazed upon...two books of rare stamps, for my grandfather Sol--the ardent philatelist--each night locked away his prized collection of United States and international stamps, valued at the time at $5000, (the equivalent of $210,000 today).

Our crook carefully removed the books and made himself comfy, perhaps even plopping himself into one of the office chairs, where he spent the next thirty minutes marveling at my granddad's lovingly assembled stickers.

It's what happened next that would have taxed the credibility of even the hardest of hard-bitten dime-novelists.

The thief picked up a pencil and composed a note to Sol on the fly-piece of one of the stamp books:

Friend--
I have spent a very pleasant half-hour perusing your collection.

I must admit it is an excellent one. Having been at one time a philatelic enthusiast I can appreciate their value.

Therefore, I pray you, be considerate when you judge the writer for I assure you it required the utmost will power to "pass it up". No, not one is missing. I thank you. Gloves are quite a hindrance when writing.

Quite a hindrance, indeed. The finished product may have looked like a kindergartner's scrawl, but every word was correctly spelled. Paragraphs were properly indented. And his word choice! Perusing! Hindrance! Philatelic enthusiast!

The only error: punctuation at the end of the phrase "pass it up"--our crook placed the period on the wrong side of the quotation marks.

Still. Quite the author, no?

In the ensuing weeks Elmira police proved unable to solve the crime, and the incident faded into family lore.

While I eventually wound with Sol's stamp collection, Sol's daughter Evelyn possessed the thief's missive. Evelyn passed away in May 2009 at the age of 96, but my aunt's memory remained sharp until the end.

In the summer of 2008 I visited Evelyn at her home in Long Branch on the Jersey shore and we reminisced about the Teppers theft. "As the years went by we'd say, 'Well, maybe it was John Dillinger that broke into Teppers,' but we'll never know for sure," she told me. Evelyn was twelve at the time of the burglary and remembered her father showing off his collection--and the note--to customers and friends.

But the Teppers heist was no Dillinger job: he was locked away in an Indiana pokey at the time, a fact that diminishes this tale not a whit.

For the perp may have been a nameless nickel-ante fourth-story man, but his act of philatelic compassion traveled through time and four generations, a true-life fable passed from grandfather to father to son--and now to my son as well.

And yes, we will show compassion when judging the writer, for while there was clearly larceny in his heart, the philatelist in him was scrupulously honest.
Posted by TGB at 8:08 AM 1 comment: 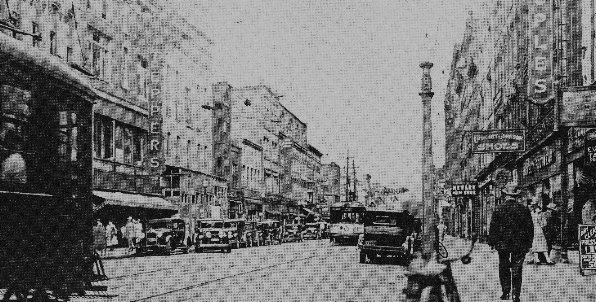 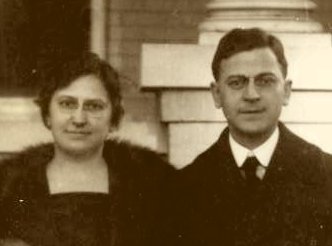 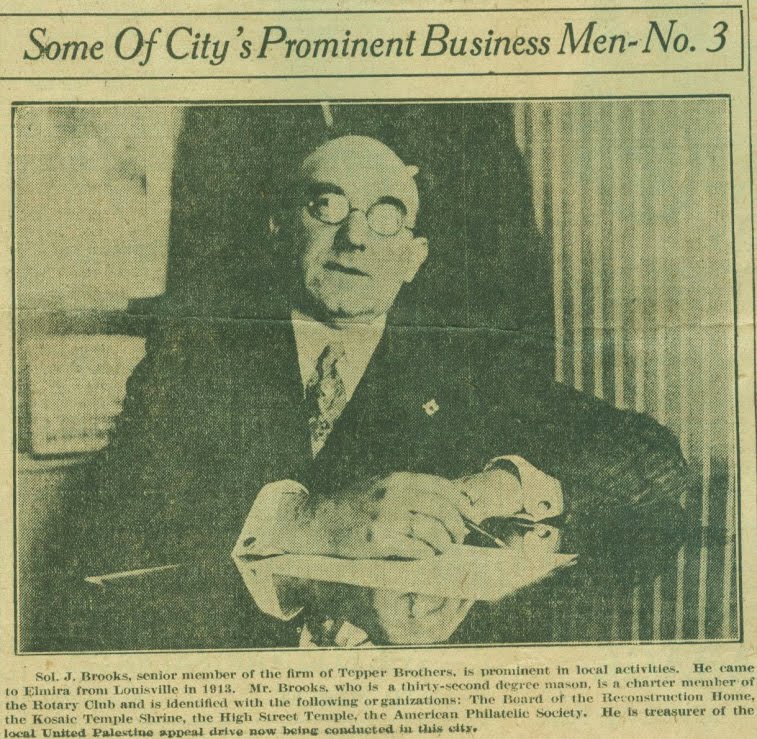 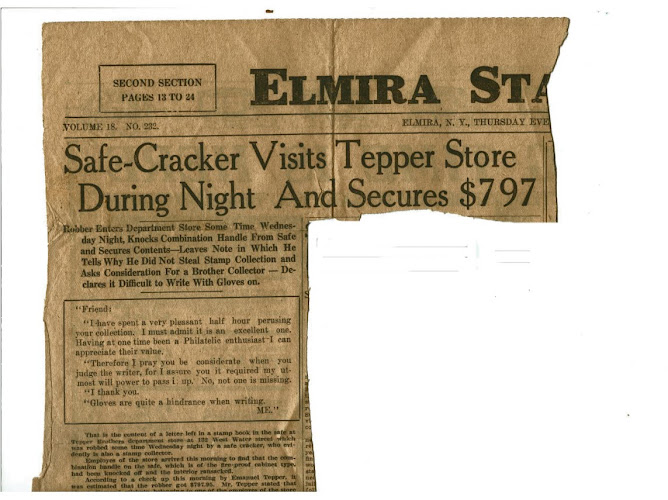 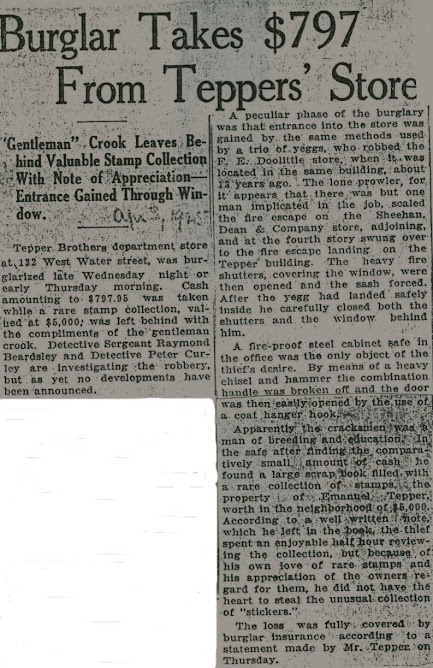